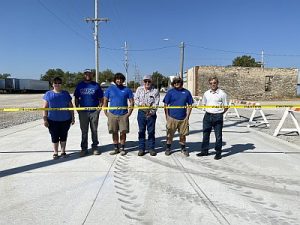 The City of Frankfort completed a project in Fall 2020 that improved one of its existing truck routes. The project was funded through a combination of a CDBG grant and a USDA Rural Development loan. (Photo courtesy of Frankfort Area News)

What had been one of the roughest streets to travel in the City of Frankfort is now one of the smoothest after the city completed a major project to improve an existing truck route.

Highways 9 and 99 intersect in the heart of Frankfort’s downtown district. Having two state highways running through town, the city sees a tremendous amount of truck traffic. An east truck route was previously updated and already approved by the Kansas Department of Transportation (KDOT) as an official truck route. The city’s truck route on the west side of downtown was another story.

“The street had tons of pot holes and we couldn’t keep it repaired enough for trucks or even local traffic to use,” Frankfort City Clerk Melody Tommer said. “We wanted it to be an approved KDOT truck route and it is in the process of getting approval from them now.”

The city believes its efforts to improve the route will ultimately help preserve the roads downtown from the wear of heavy truck traffic and decrease congestion in the downtown area.

A 2019 Community Development Block Grant (CDBG) award of $265,656 helped make this street project possible. Funding for the project came in the Community Facilities category of the Annual Competitive Grants offered by the Kansas Department of Commerce. In addition, the city put in an equal amount of funds it secured through a USDA Rural Development loan.

The resulting project upgraded the existing highly trafficked west truck route to concrete pavement. Corresponding storm sewer, sidewalks and curb and gutter improvements were also made. The truck route reopened in September 2020. According to the city, the benefits of completing the project have been noticeable.

“It has been a huge improvement,” Tommer said. “Some water and sewer lines were also replaced, along with storm sewer improvements. Trucks and heavy equipment are using it more and more and therefore saving our downtown streets from all the wear and tear.”

For more information about the funding sources used for this project or to discuss a project need, contact the NCRPC community development staff.

This article appeared in the May 2021 NCRPC Newsletter.