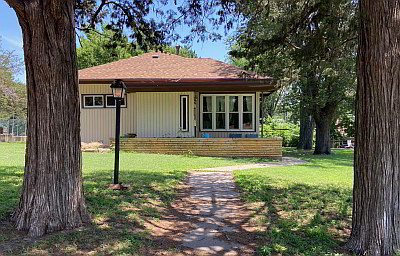 Multiple programs were involved in the recent improvements to this Ellsworth home. (Courtesy Photo)

When Elizabeth George purchased her Ellsworth home, the list of needed improvements was long. Fortunately for her, the timing was perfect to participate in the city’s Community Development Block Grant (CDBG) housing rehabilitation project.

The City of Ellsworth was awarded funds for a CDBG housing project in 2018. The CDBG program is administered by the Kansas Department of Commerce.

“The George home really showcases what can be achieved when multiple programs are involved,” NCRPC Housing Director Carol Torkelson said.

North Central Regional Planning Commission completed the inspection for the First Time Home Buyer program and administered the CDBG project for the City of Ellsworth. It also operates the Weatherization Assistance Program in a 41-county service area—including Ellsworth County.

“The timing of all three programs worked out really well,” Torkelson said. “Running the Weatherization Assistance program along with the city’s CDBG Housing Rehabilitation project also helped maximize the use of funds for both programs and helped get a home up to the state standards.”

The City of Ellsworth was awarded a previous CDBG housing rehabilitation project in 2014 and understood the potential benefits for its citizens.

“A lot of times, citizens have full intentions and desire to update or fix problems with their homes, but it is just not financially feasible,” Ellsworth Mayor Mark Kennedy said. “For a small financial commitment from the city, we can see tangible evidence of benefit in an area of need.”

The majority of the work done on the George home included replacing windows, replacing exterior doors as needed, and various insulation measures to improve energy efficiency. The improvements have helped lower George’s utility bills while increasing her peace of mind and pride in her home.

“I feel as a resident of a community that has taken part in the CDBG program, it has only improved our community,” George said. “It is a great thing to see neighborhoods come back to life and know that you had a part in it.”

There are many great things happening in North Central Kansas. The Project Spotlight series features projects around the region to share ways communities have solved challenges. To view more Project Spotlights, visit https://www.ncrpc.org/tag/project-spotlight/.

This article appeared in the July 2020 NCRPC Newsletter.