Population Change in NCK: A Matter of Perspective

Reactions to August Census Bureau Release of Some 2020 Census Data 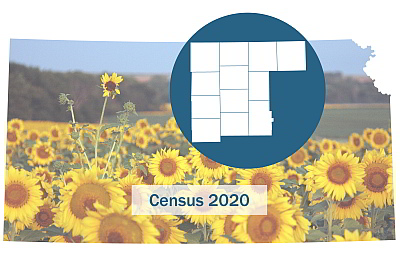 In nearly every conversation regarding the biggest threats to North Central Kansas, “population loss” is at or near the top of the list. The recent survey NCRPC completed about the region’s greatest strengths, weaknesses, opportunities and threats provided no exception with “population loss” being identified as the #2 threat to North Central Kansas.

This ongoing conversation about population loss has left many of us on the edge of our seats waiting for the updated census populations numbers to hit our inboxes. Some cautiously optimistic, some holding their breath, it has been difficult to predict if the numbers in North Central Kansas would be favorable or disheartening. In August, these census numbers were finally released. Overall, I have gotten the impression that most of us do not know what to think about the results.

When skimming census numbers on a computer screen, there is a lot of negative. There is no denying that official census population loss does have negative impacts on our cities and counties. However, I feel extremely optimistic for rural Kansas based on what many of our cities and counties have experienced since the pandemic.

In 2019, our region had hundreds, maybe even a thousand, homes on the market. Today, most of our cities have less than a dozen homes for sale with many having no open housing options available. Housing availability has taken the forefront as one of the biggest needs in our region. Similarly, we see an extreme shortage of childcare availability. While some factors, such as retirements and state regulations have contributed to this burden, the need for childcare still indicates that young people are growing their families or moving to town. Both of these needs within our region can take a positive spin as definite indicators of population growth! I think it worth noting here that while Washington County saw an overall population loss of -4.64%, 5 of its 9 cities saw population growth!

So, while on paper the population numbers in North Central Kansas may be disheartening, I hope the shift in our focus of overall needs, as well as the growth many have experienced firsthand within our cities over the last 12 months will keep rural Kansas optimistic about our future! We cannot get bogged down and consistently focus on population loss. We must work together to focus on what makes our populations grow and nurture those elements of community that make rural Kansas great! We must look at what is actually happening within our communities and use those experiences to determine success. 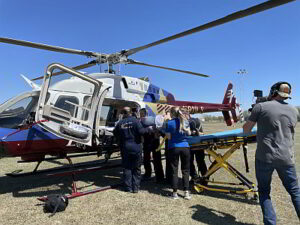 On April 29, 2021, an explosion exercise occurred at the North Central Kansas Technical College’s (NCK Tech) Welding Department. A well-designed “Disaster Day” exercise was put on by the Nursing Department of NCK Tech and was pulled off with the collaboration of numerous partners.

Two moulage artists gave of their time to make the victims have life like injuries such as third-degree burns, impaled objects and a compound clavicle fracture. Michell County Hospital Health Systems staff volunteered and helped in the mock emergency room. An air ambulance from Life Star dispatched from Junction City came and picked up one victim for simulation purposes. Beloit Fire Department shared their knowledge and also lent their smoke machines for replication in the event. Mitchell County EMS responded lights and sirens and also assisted in teaching the NCK Tech Practical Nursing Program students about triage and transport. Mitchell County Emergency Management and Salina Regional Health Center’s Preparedness Coordinator helped with setup and coordination of the day’s events. The City of Beloit provided and set up street barricades and the Mitchell County Sherriff’s Department was there to provide assistance if needed. The Mitchell County Health Department Administrator, the Lincoln County Emergency Preparedness Coordinator, and the North Central Kansas Regional Public Health Coordinator evaluated the exercise. Eberle Studios filmed and produced a professional video of the exercise.

“This exercise offered an excellent opportunity for leadership growth and training in the North Central region,” NCRPC Executive Director Emily Benedick said. “We recognized the value of this event and in having a professional videographer document it to help promote future emergency preparedness and disaster management training efforts throughout North Central Kansas.”

According to NCK Tech Nursing Instructor Samantha Miller, the training built on the leadership skills of students. “During the training, our students were pushed beyond their comfort zones and forced to critically think and communicate in a high-stress environment to ensure their patients received the best possible care,” Miller said. “Prior to the start of the event, the students received a quick briefing but otherwise were left to take the initiative and make decisions from a leadership perspective. It was amazing to watch them step up and execute a successful drill. Members from our graduating class have already provided feedback on how this experience has helped them in their current practice only months after graduation.”

Have you heard the buzz about social media marketing but don’t know where to start? Do you think it is too complicated or that you need a teenager to help?

Jenny Russell of JenRus Freelance put her students at ease and gave them the tools to branch out into the cost effective and persuasive marketing tool of social media.

Some of the questions that you need to ask yourself as you dive into the world of social media are: What is your goal? Who is your audience? Where are they viewing?

Once you identify your audience and their social media preferences, then it is time to build your social media. Make sure to tell a story and don’t just sell on your posts.

What stories? Some of the ideas include sharing personal stories, something funny that just happened, helpful hints and recipes, educating your audience, praise other’s successes, share stories from complementary businesses and talking about your town.

It is always helpful to have good pictures with good lighting. There are free editing tools available online at sites such as Canva or your phone and Instagram have filters that you can use.

Live videos and blogs are also good for social media. Just make sure that you highlight your unique positioning statement, the more content the better. Do not post more than three times per day while making sure to provide something valuable to your followers.

All this information and more was shared during the Social Media Marketing class from JenRus Freelance in August. This course and many more are provided free of charge through a grant awarded to the NCRPC.

To sign up for future courses, visit the training page. 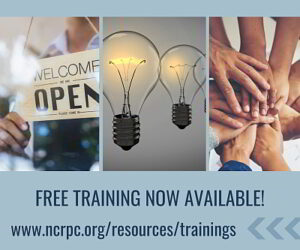 Registrations are now being accepted for residents, businesses, and non-profit organizations located in North Central Kansas to attend free training covering a variety of topics.

More than 40 courses are currently scheduled in the categories of business and nonprofit basics, business succession planning, developing an online presence, and nonprofit board development and retention. Training specific to grocery stores will be available soon. Many of the courses will be delivered online via Zoom, but some will be in person.

The training has been developed as part of the region’s response and recovery to the economic impacts of COVID-19. It is funded in part by the U.S. Department of Commerce Economic Development Administration’s CARES Act Recovery Assistance grant awarded to the NCRPC. Training will go through June 2022 and is free, but advance registration is required. To view the full calendar and to register, visit www.ncrpc.org/resources/trainings. We are continuing to fine tune offerings, so check back often or complete the email form at the bottom of that web page to be notified when new courses are added.

We are always looking for ways to reach a wider audience with this training to have the greatest benefit in the region. If you would like a flyer or additional materials to share with a specific group or have any questions, please email Lori Thielen at communications@ncrpc.org.